Woodthorpe Grange Park is an impressive large green space that sits on the edge of the city and has a wide variety of facilities including pitch and putt, tropical house, formal gardens, sports pitches and café.

Where is The Park

Within the park lies The Grange, a 19th century Grade II listed manor house which sits amidst a mix of landscapes and includes formal gardens, green houses, grassland and small wooded areas. An 18 hole pitch and putt course and two football pitches attract sports enthusiasts whilst the Tropical House, 'sunken garden' with water feature and innovative train sculpture at the entrance to the old railway bridge appeals to visitors from both the city and wider surrounding area.

A new play area was installed at Woodthorpe Grange in 2011/12. A further £200,000 of Council funding has been invested at Woodthorpe to rebuild the pitch and putt office and provide toilets and a café.

The kiosk has been designed to complement its park surroundings and is very environmentally friendly. The building has a 'green' roof made of sedum, a perennial which forms blue-green rosettes of succulent foliage throughout summer. This will encourage plants to grow and wildlife to visit. Light tubes allow the building to be lit using natural daylight, movement sensors minimise waste on electric lighting and push-taps automatically shut off to avoid water wastage.

Bringing you delicious food and drink at great prices.

Dietary requirements can be catered for and allergen and ingredient advice is available for all of our menus and staff.

Open all year except Christmas Day, New Year's Day and some bank holidays.

Currently, home to part of the Sport, Culture and Parks Service of Nottingham City Council and not open to the public.

Greenhouses have been part of the park's make-up since its conception in the late 19th century, rebuilt in 1994 they now provide the vast majority of flowers and plants used for Nottingham in Bloom. Tours of the Greenhouse can be arranged with the Nursery Manager on 0115 915 0074.

Dating back to the redevelopment of the greenhouses, the Tropical House now holds a variety of plants and trees, including a banana tree.

Opening Times for The Tropical House

Occupying about a quarter of the park's space, the 18 hole course plays on a hill slope around the old railway line and provides a challenging but fun alternative to a full course. Open to all, with or without clubs. For further information see our Park Activities page. 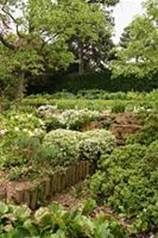 For those familiar with local history, the name 'Woodthorpe' does have Saxon overtones, but the site has never seen a settlement of any size other than The Grange itself and a couple of farms.

Records show that The Grange was not built until 1874 after the land was bought by Henry Ashwell which was where his family lived until the mid-1890s when it was sold. Following a generous donation from Sir Jesse Boot, the founder of Boots and Co Limited, the house was then bought by Nottingham City Council in 1921.

Woodthorpe Grange has now been in the ownership of Nottingham City Council for over eighty years and is home to Nottingham City's Sport, Culture and Parks Service, the maintenance depot for the local area's ground maintenance team and the City's nursery section.

Clearly visible from the maps of 1883 the gardens have been lovingly restored to their former glory with traditional designs being mixed with current planting features.

Opened in 1889 the railway line was created as part of the Nottingham Suburban Railway (NSR) and included Sherwood Station. The last train ran in 1951 following the decline of NSR, now the only remains of the line are in the tunnels throughout the park. The Northernmost tunnel has a train sculpture at its entrance to interpret the short-lived past of this line.