The number of MPs is set to be reduced from 650 to 600, with each constituency required to represent between 71,031 and 78,507 electors, according to the electoral register on the 1st December 2015.

All three existing City of Nottingham constituencies are “well outside” the desired electoral range set out in the BCE (Boundary Commision for England) criteria (they currently range from 57-65,000). Because of this, the Boundary Commission have proposed considerable changes within and around the City, with all three current constituencies needing to acquire a substantial number of additional electors to fall within the desired electoral range.

As a result the BCE has proposed the following changes to the three current Nottingham Constituencies see Appendix 1:

Under the BCE proposals, city constituencies would cross multiple local authority boundaries, and there would be a total of five constituencies crossing the City of Nottingham boundary, as opposed to the current three within it. This would result in the clear accountability between constituents, local authorities and MPs being eroded.

Within the BCE proposals, there are other knock on impacts for the City of Nottingham and constituencies outside the city, including the two Clifton wards in the city transferring to a new West Bridgford constituency.

Nottingham City Council believes it is in the best interests of the residents of Nottingham to limit the number of constituencies that intersect the city and maintain the current MP representation along existing local authority boundaries as much as possible.

This will mean that the level of accountability between constituents, local authorities and local MPs is maintained. Confusion for Nottingham residents will also be reduced by minimising the crossover of multiple local authority boundaries.

To stay within the BCE’s proposed thresholds for constituency sizes, and reduce the impact of any changes, the City Council is proposing two constituencies that stay within the current city boundary, and a third extending into a neighbouring district.

The counter proposal is set out below.

Nottingham East extends to include Carlton and Netherfield, and Nottingham South would extend through Central Nottingham to include Arboretum and Berridge wards but maintain the existing city boundary. Nottingham North gains Leen Valley ward within the city (see Appendix 2).

This option gives the minimal level of change to the City that is possible to meet the BCE’s electoral thresholds, whilst still allowing the BCE scope to create County constituencies which fit within its thresholds. It also maintains the current number of MPs with constituencies covering the city.

Appendix 3 gives a breakdown by ward of both the BCE’s proposals and the Nottingham City Council counter proposal. 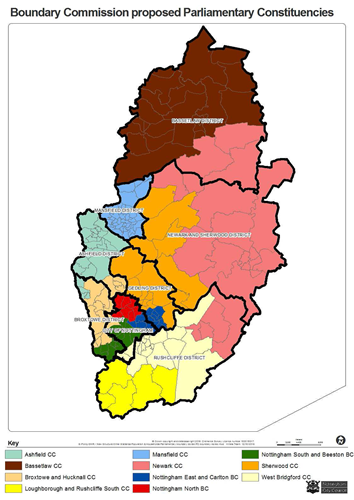 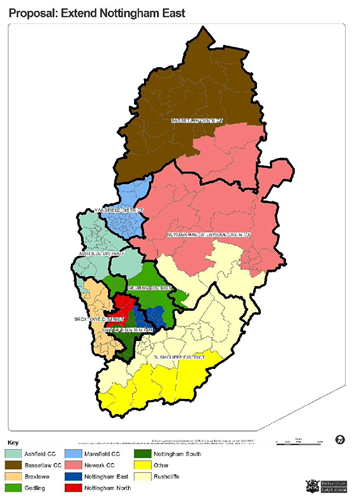