Climate change has become a significant cause for concern across the world. The last 4-year period has been the warmest on record, extreme weather events are becoming more severe and common, where July 2022 recorded the highest ever UK temperature of 40.3°C.

A big factor in the change in our climate is the impact of human produced ‘greenhouse’ gases, mainly carbon dioxide CO2, increasingly trapping heat in the atmosphere. This has led to over 300 local authorities in the UK declaring climate & ecological emergencies and the realisation of the urgent need to significantly reduce carbon emissions to as close to zero as possible.

The Carbon Neutral Action Plan sets out high-level objectives to achieve a resilient and sustainable carbon-neutral Nottingham by 2028 (CN28).

The plan is broken down into four main sections, covering a range of themes: 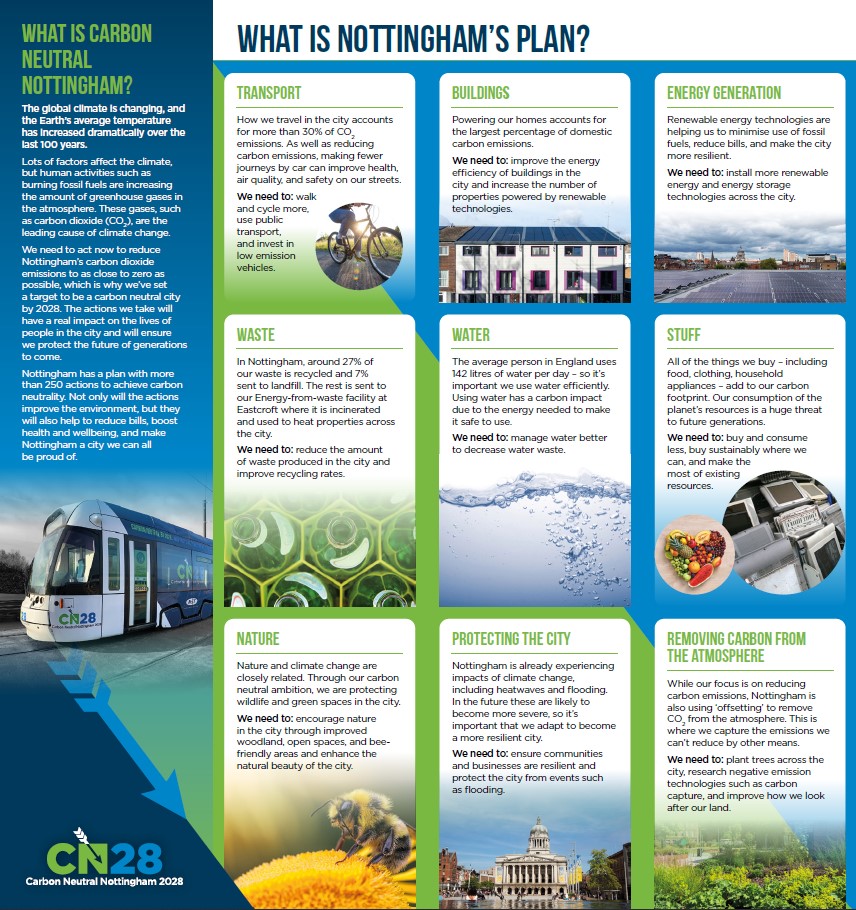 Our 251-point plan sets out where we in Nottingham need to go and focuses on the actions the council and the city can take now. Together we can make Nottingham the  first carbon-neutral city in Europe, bringing benefits to all who live in, work in, and visit the city.

Nottingham has reduced its overall CO2 emissions per capita by 57.7%, the highest reduction of any UK core city. During the second year of delivery, significant achievements have been made to help continue the downward trend of CO2 emissions in the city.

The full Carbon Neutral Nottingham 2028 Action Plan Review for 2021-22 has all of the second year's achievements and a preview of what's coming next.

Tweets by CN2028
Is there anything wrong with this page?