Let's get the city buzzing

The UK is currently home to about 267 species of bee, including colony species such as the domestic honey bee Apis mellifera and 24 species of the bumblebee, as well as over 220 species of solitary bee, include leaf-cutting, carpenter, mason and mining bees.

Bees are pollinators, they fly from flower to flower collecting nectar and pollen to feed themselves and their young, distributing the pollen from flower to flower as they go. This process of pollen transfer is vital for many plants to produce seed and to reproduce, maintaining genetic diversity in the plants they pollinate. Other insects also play this essential role, such as butterflies and hoverflies, but bees are considered to be the most vital and prolific of the pollinators, given their special adaptations and exclusive diet of nectar and pollen. Some plants such as red clover, oilseed rape and tomato plants rely entirely on bees for pollination.

Honeybees utilise plant odour when foraging for flowers and recent honeybee research has shown that plant odour are concealed by nitrogen oxides released in vehicle exhaust fumes.  It is thought that this will reduce the bee's ability to find suitable flowers and directly impact on levels of pollination.

Pollination is an essential service for many reasons; it is economically very important, allowing for the production of the majority of the fruits and vegetables that we eat and on which we rear livestock. It allows wild plants to reproduce, creating the diversity of plants and habitats that are all around us and allowing them to colonise new areas and spread around the country. Bees are an essential part of ecosystems, as pollination causes plants to make seeds that can then be eaten by animals such as birds.

What's Happening to the Bees

Bee populations are under pressure and many are believed to be declining globally, as a result of a range of issues such as disease, agricultural changes and habitat loss, degradation and fragmentation. Climate change may also be having an impact on bees, not just as a result of changes to temperature, but also the influence on the timing of plant flowering and bee emergence through the year. If bees emerge too early or late the plants on which they rely may not yet have flowered or have finished flowering.

The honey bee is almost exclusively a domestic species these days, with wild colonies believed to be virtually extinct. However, even the domestic colonies are facing problems and beekeepers are struggling to keep their colonies alive and healthy as a result of viruses, diseases and parasites such as the Varroa mite (Varroa destructor), a blood-sucking parasite that spreads diseases that can kill whole colonies if not detected and eradicated early.

Wild bee populations are also suffering as changes in land management and agricultural practices such as intensification of the use of farmland and the heavy use of herbicides and fertilisers has lead to fewer wildflowers available for bees to forage upon. Loss of hedgerows and wild unmanaged margins around fields has caused fragmentation of suitable habitat areas, especially for the more sedentary solitary bees, isolating populations from one another and preventing genetic exchange and reducing the supply of nest sites and foraging areas. Insecticide use can also impact bees, sometimes killing bees directly or damaging to their ability to navigate or reproduce, or reducing their resistance to disease. Insecticides containing neonicotinoids are being investigated as one of the most harmful substances for bees.

Different types of bee collect nectar and pollen from different types of flowers, and different plants flower at different times of the year, so the availability of a variety of plants is more beneficial than a monoculture. For example, bumblebees have a longer tongue than other bees and have a preference for flowers with a long corolla (tube), for example, foxgloves and dead-nettles. Bees with shorter tongues will avoid flowers where they can't access the nectar source and will favour flowers with a more open structure such as forget-me-nots or poppies.

What We're Doing to Help 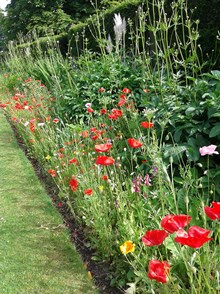 In 2014, we launched a campaign and started making some lasting changes to the way we manage our open spaces to help our wild and domestic bees and provide more flowers for foraging and more habitat for nest sites.

What we've done so far:

What we're hoping to achieve in the future:

You may have noticed some small metal signs popping up in various parks and open spaces throughout the city. These bees signpost specific flower beds, meadow areas and other areas where we are undertaking altered management measures to support our local pollinators as part of the Bee-Friendly Nottingham campaign.

What You Can Do to Help 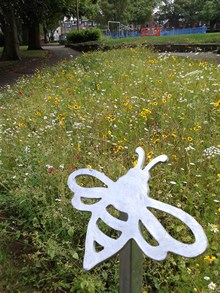