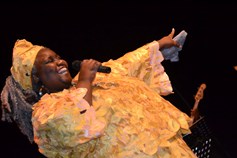 Whilst Nottingham recognises and celebrates October as Black History Month, we are keen to acknowledge the life, history and achievements of Black people who changed society in the UK throughout the year as part of the national campaign Black History 365 campaign.

Throughout 2019, Nottingham City Council and Nottinghamshire Police will be leading the campaign and will be working with a range of partners, stakeholders, community groups and colleagues to host and promote many events, activities, campaigns and much more.

Ms Patty Dumplin was pleased to host Black History 365 community consultation event at the start of the year, on behalf of Nottingham, City Council and Nottinghamshire Police. The event, which was very well attended, brought up some interesting discussions.

Patty said … “This is not just a talking shop you know, we need action!

Nottingham has a wealth of diversity in its history and its people. The Black History 365 campaign seeks to harness this diversity and celebrate black history throughout the year. Nottingham City Council and Nottinghamshire Police are keen to work with community groups and partners to explore how we can embrace this locally. 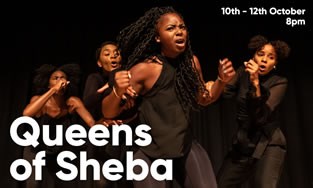 Queens of Sheba - Turned away from a nightclub for being “too black”, four women take to the stage with their own explosive true stories.

The multi-award-winning “theatrical firework” (The Independent) Queens of Sheba is now on tour and coming to Nottingham following critically acclaimed, sold-out runs in London and Edinburgh.

Loosely based on the DSRKT nightspot incident of 2015, Queens of Sheba tells the hilarious, moving and uplifting stories of four passionate Black Women battling misogynoir every day – where sexism meets racism.

Welcome to the Caribbean. Where the sun is hot and the living is uneasy. Meet three women. An unlikely trio. Different ages, backgrounds and attitudes. Each has a unique relationship with the island. A home. A regular holiday haunt. A first-time visit. Through language that fizzes and sparks, we begin to discover that they share one surprising thing in common. Trade was first performed in 2005 by the Royal Shakespeare Company, New Perspectives in association with The Brewery Arts Centre brings Debbie Tucker Green’s distinctive voice to regional audiences. Trade Three very different women in the Caribbean who realise they have one thing in common

Ballet Black: Triple Bill featuring Ingoma 15 October, 7.30 Ingoma (meaning song), created by company dancer and choreographer Mthuthuzeli November is a fusion of ballet, African dance and singing. This premiere and Barbican co-commission portrays a milestone moment in South African history and imagines the struggles of black miners and their families in 1946 when 60,000 of them took courageous strike action. Ballet Black reprise Martin Lawrance’s “wickedly intelligent” (The Guardian) Pendulum – an intimate duet which premiered in 2009 and the choreographer’s first work made for the company. CLICK! an original, light-hearted work by Scottish Ballet’s choreographer-in-residence, Sophie Laplane, also a premiere, completes the Triple Bill. Ballet Black A fusion of ballet, African dance and singing.

Getting the third degree Wednesday 23 October 2019, 7.30 pm This compelling new drama tells the powerful and deeply moving story of Laurie Cunningham who came to prominence with West Bromwich Albion in the late 1970’s. The first of the black footballing trio famously dubbed ‘The Three Degrees’ – Laurie Cunningham, with his swaggering style and dazzling skills forced favourable comparisons with the legendary Pele. The first black footballer to sign for the mighty Real Madrid and only the second to win a full cap for England, he inspired a whole generation of young black players to follow in his pioneering footsteps. Getting The Third Degree was commissioned by Kick it Out to recognise the 25th anniversary of its ongoing battle against discrimination in football. In dramatising Laurie Cunningham’s meteoric rise to stardom, Getting The Third Degree also explores how he and his fellow black players – Brendon Batson and Cyrille Regis – triumphed over the racial abuse and physical threats often orchestrated by The National Front through a potent combination of footballing brilliance, charismatic style and compelling dignity. Incorporating 1970’s funk, soul and blues, contemporary commentary and social and political speeches, Getting The Third Degree

NAE's CaféBar is the perfect venue for an evening of creative and relaxed vibes. All Black Connect presents a relaxed painting session designed and lead by local artist Kim Thompson. Materials are provided and there will be cocktail specials on offer with a backdrop of classic and contemporary RnB presented by Coralie. The night's festivities are the perfect precursor for the much-celebrated classic RnB night Honeydips at Hockley's Bar 11.  http://www.nae.org.uk/event/sip-and-paint/819 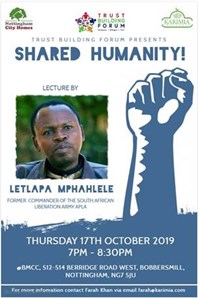 Letlapa Mphahlele, former commander of the South African liberation army APLA during apartheid, invites you to join him in the exploration of ‘Shared Humanity’.  Discussing what unites us as human beings beyond different cultures and beliefs, Letlapa will share his own incredible journey from ordering high profile retaliatory massacres on white civilians to seeing the whole of humanity as “my people”.  Letlapa’s story is told in the award-winning film Beyond Forgiving, and the documentary’s executive producer Howard Grace will also be in attendance. Beyond Forgiving depicts the journey of two South Africans to bring healing and reconciliation to their country post-Apartheid. Ginn Fourie and Letlapa Mphalele form an unlikely pair: a black atheist man and a white Christian woman.

MIMESIS: African Soldier, Exhibition 27 September – 31 December 2019. The First World War was waged between empires that were global in their ambitions and reach. Between 1914 and 1918, millions of African and colonial soldiers served in long campaigns that spanned the whole of the African and European continents, contributing to victories throughout the First World War. These soldiers from British and French African territories were brought to Europe's western front, where hundreds and thousands lost their lives alongside unknown, unheralded and undocumented African labourers and carriers. Mimesis: African Soldier seeks to commemorate these Africans and colonial soldiers who fought, served and died during the First World War. Mimesis: African Soldier sees Akomfrah use historic film, including material from IWM's extensive archive, to tell some of the lesser-known stories of the First World War. MIMESIS

Beyond Diagnosis 27 September – 10 November 2019. Sistas Against Cancer, Self Help UK and Macmillan Beyond Diagnosis Service present a photographic exhibition representing the experiences of women affected by cancer within the Black Asian Minority Ethnic and Refugee (BAMER) community. Over a four-month period, local photographer Michael Ellis has captured candid glimpses into the experiences of the Sistas' individual cancer journeys. NAE is showcasing these images and the stories behind them to raise awareness within the BAMER community about cancer and the support available. Beyond Diagnosis

Truth Black History 6 October 2019, 12 – 4 pm. Through music, spoken word and poetry, we reflect upon the relationship between Black history and the mental health issues affecting Black communities today. This event will encourage us all to consider what actions we can take to create a future where the health and wellbeing of Black communities can thrive. Join us for a combination of family-friendly activity, plus talks and performances more suitable for older audiences. In partnership with Truth Mental Health. Truth mental health

As part of BHM celebrations on Saturday 26 October, 12 – 4 pm “Yu Get Mi” – Raising aspirations presents “Speaking across the divide”, a series of intergenerational dialogues in culturally specific space, to explore what divides us and what brings us together. There will be Light refreshments, round table talks and intergenerational dance-off.

Pioneers 492 Celebrating UK’s DNA. 19 October 2019, 10.30 – 4 pm A celebration & educational event about the Windrush generation & their contribution to UK life. On the day there will be a plaque unveiling, Caribbean lunch, poetry, quadrille dancing, storytelling, prizes and choir singing. Pioneers 492 Project 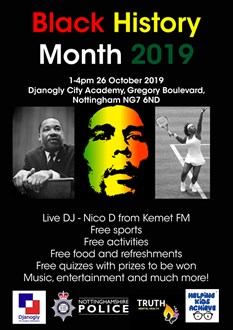 Monday 7 and Tuesday 8 October 2019 for the screening of three BBC documentaries directed by the British director, James Maycock: James’ work provides a unique perspective, at different times and places during the mid-20th Century, of the influence of Black American music and youth culture on the UK - well before the advent of either social media or Hip Hop. His work also provides a timely reminder of how music can reflect both cultural and political change in a country.  Northern Soul and The Motown Invasion will be screened on Monday 7 October at 7.30 pm. Motown Records will celebrate its 60th anniversary in September 2019, with the announcement of a feature-length documentary ‘Hitsville: The Making of Motown’ scheduled to make its premiere in North America, UK and Ireland this Autumn. Monday Northern Soul: Living for the Weekend and The Motown Invasion and Tuesday Gershwin’s Summertime

Nottinghamshire Police - Join us on the 26th October at Djanogly City Academy (Gregory Boulevard) to celebrate Black History Month. The event will start at 1 pm and will include the following:

SWEET PATOOTEE present MUTINY, a unique documentary about the First World War. It is the only time WW1’s Black British veterans have been allowed to tell their own story. By doing so they reveal a history that was suppressed, ignored and forgotten for 80 years – a landmark that shaped the parents of the Windrush Generation. 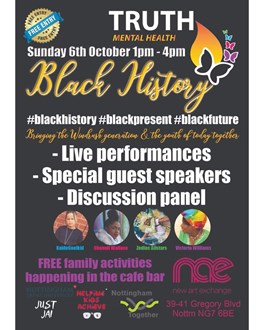 The information pack can be downloaded here: